Xiaomi increased shipments by over 290% to 9.2 million units in India

The latest report by Canalys confirms what we expect. Xiaomi is coming to India as the leading smartphone provider. 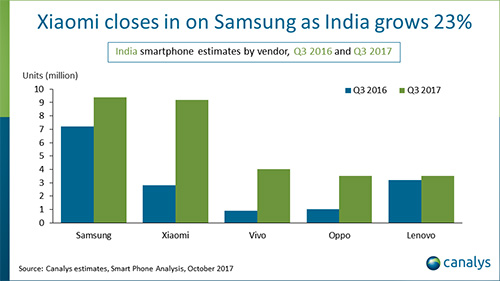 After a wobble in Q2 2017, India’s smartphone market recovered quickly, with shipments growing 23% year on year in Q3 2017 to reach just over 40 million units. India has now overtaken the United States to become the world’s second largest smartphone market after China. Samsung and Xiaomi, which shipped 9.4 million and 9.2 million units respectively, accounted for almost half of the total market as the top five vendors continued to post strong growth in Q3 2017.

“This growth comes as a relief to the smartphone industry. Doubts about India’s market potential are clearly dispelled by this result,” said Canalys Research Analyst Ishan Dutt. “There are close to 100 mobile device brands sold in India, with more vendors arriving every quarter. In addition, India has one of the most complex channel landscapes, but with low barriers to entry. Growth will continue. Low smartphone penetration and the explosion of LTE are the main drivers.”

Despite posting excellent results, the market continues to concentrate, with the top five vendors (Samsung, Xiaomi, Vivo, Oppo and Lenovo) now accounting for 75% of total shipments in India. Samsung shipped 9.4 million smartphones, almost 30% more than in Q3 last year. Second-placed Xiaomi increased shipments by over 290% to 9.2 million units. “Xiaomi’s growth is a clear example of how a successful online brand can effectively enter the offline market while maintaining low overheads,” said Canalys Analyst Rushabh Doshi. “But Xiaomi focuses on the low end. It struggles in the mid-range (devices priced between INR15,000 and INR20,000 [US$230 and US$310]), where Samsung, Oppo and Vivo are particularly strong. Nevertheless, we predict Xiaomi’s continued go-to-market innovations will allow it to overtake Samsung within a couple of quarters.”

Keep in mind that the smartphone market is a growing market. Even if Xiaomi is now focusing on medium-sized products in the future, they will be able to take the lead in better products. We have discussed this before. Indians are more financially educated. Starting from the moment they think it necessary a better smartphone will definitely order it. Until then, I use a medium high level.

Not surprisingly, the most successful Xiaomi team in marketing is in India. Here is the challenge but also a great responsibility.